Our Search for Purpose & Meaning

"It’s impossible to feel dread when you have a compelling future... a powerful mission or vision in front of you. It’s hard to drudge through life when there is MEANING attached to your future...

You can’t live in darkness when you believe your future is bright. Perhaps the problem then, is that many of us believe the FUTURE will not be better than the PAST.


Do Not Give Up On The Person You Are Capable Of Becoming (Inspirational Video)
Posted by The Matt Garcia Foundation at 10:00 AM No comments:

Why Students Should Have Mental Health Days | Hailey Hardcastle


School can be rife with stress, anxiety, panic attacks and even burnout — but there's often no formal policy for students who need to prioritize their well-being. Hailey Hardcastle explains why schools should offer mental health days and allow students time to practice emotional hygiene without stigma. Follow along to learn how she and a team of fellow teens transformed their advocacy into law.
Posted by The Matt Garcia Foundation at 7:44 PM No comments:


Even as a high school football star, Billy fell into a dark tunnel. Within a 9-month period, Billy’s two most important people were killed and he felt responsible for both deaths. He found his light switch after 20 years of incarceration, which led him to rediscover hope through self-forgiveness.

"I see myself as caring, earnest, loyal and full of life. I want to bring happiness to a person’s day. If I notice someone isn’t happy or feeling well, I want to make him smile. I find joy and passion in team settings; I love to work with others. What got us where we’re at does not need to define us. I love sports and working out."
Posted by The Matt Garcia Foundation at 10:00 AM No comments:

Don't Try to Please Everyone. You're Not Pizza!


You. Cannot. Please. Everyone. Don't even try it! Don't be boring. Don't be taken for granted. Basically... don't be pizza. Instead of being a people pleaser, take pleasure in finding YOUR people.
Posted by The Matt Garcia Foundation at 5:33 PM No comments:

I've Never Met A Strong Person With An Easy Past


Never Met A Strong Person With An Easy Past Motivational Speech by Fearless Soul.
Posted by The Matt Garcia Foundation at 5:54 PM No comments:

To Overcome Challenges, Stop Comparing Yourself to Others | Dean Furness


When you stop comparing yourself to others, you can accomplish great things, says wheelchair athlete Dean Furness. He shares how, after losing the use of his legs in an accident, he discovered a powerful new mindset focused on redefining his "personal average" and getting better little by little.
Posted by The Matt Garcia Foundation at 6:39 PM No comments:

You Can Help Support The Matt Garcia Foundation Through AmazonSmile!

You can help support The Matt Garcia Foundation by shopping through AmazonSmile.


Posted by The Matt Garcia Foundation at 7:10 PM No comments:

6 Acts of Kindness That Will Inspire You

"Look for the helpers. You will always find people who are helping."

Mister Rogers may have shared his mother's words to him as a young boy decades ago, but they are more relevant than ever as global Black Lives Matter protests continue following the death of George Floyd on May 25, after Minneapolis police officer Derek Chauvin kneeled on his neck for nearly 9-minutes, with the assistance of three other officers.

While some of the news coming out of the protests has been overwhelming at times, it's important to celebrate the acts of kindness and the displays of love being shared because, like Mister Rogers said, the helpers are always there.

Throughout the week, stories have circulated detailing inspiring moments happening around the world, from a community rallying around their neighbor who was scared to walk through his neighborhood alone to three childhood best friends coming together for a heartwarming reunion at a protest in Ireland.

Here are six acts of kindness that can possibly inspire you in your life to look for the helpers or even be the helper... THE THREE BEST FRIENDS THAT ANYONE COULD HAVE

Childhood best friends Kiitan Amao, Moyo Badun and Sean Hill unexpectedly became a viral sensation when they all reunited at a protest in the small Irish town of Dundalk, with the three men being celebrated after two photos from their childhood and current day circulated online.

Kiitan told E! News that the response to their pictures "has been crazy." But he added he's happy because he and his childhood friends are able to show the world that "the support from [their] town was overwhelming."

As for what he hoped his friendship with Sean and Moyo represents, Kiitan wanted people to know "that if you just unite and love one another you can achieve so much." 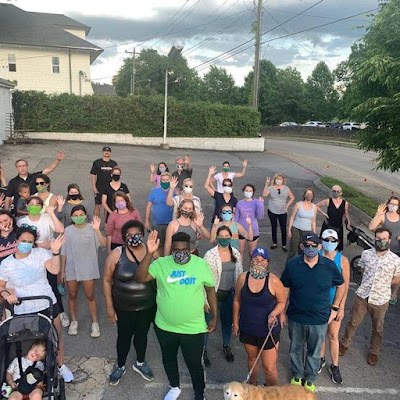 When Nashville stylist Shawn Marqus Dromgoole took to social media to share his fear of walking in his own neighborhood, his neighbors and community rallied around him.

After one of his posts expressing his fear about leaving his home—"Today I wanted to walk again and I could not make it off the porch. Then I called my mother and she said she would walk with [me]. I still kept my ID on me and my phone in my hand but I walked."—was shared on the Nextdoor app, his neighbors showed up to walk with him.

"I was afraid to walk by myself in my childhood neighborhood, because I was afraid I wouldn't live to see another day," he captioned photos on Instagram. "When I shared this fear with my neighbors they said we will walk with you. This is only the beginning." 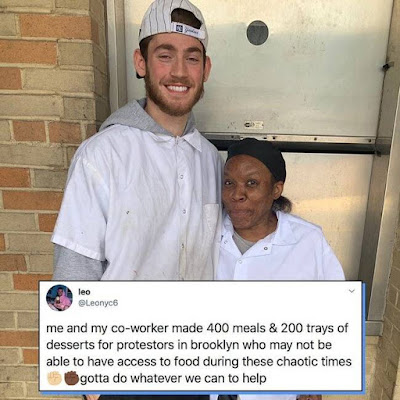 LOOKING OUT FOR ONE ANOTHER, ONE MEAL AT A TIME

Food is one of the biggest ways people connect and two co-workers in Queens are showing their support for the protesters in Brooklyn by feeding them.

"me and my co-worker made 400 meals & 200 trays of desserts for protesters in brooklyn who may not be able to have access to food during these chaotic times," Leo Dalesandro tweeted this week, along with photos of the meals they made. "gotta do whatever we can to help."

He's since started a GoFundMe, "Feeding the Fight Againt Racism," to raise funds for kitchen supplies and ingredients to continue providing as many to-go lunches as possible for protesters. 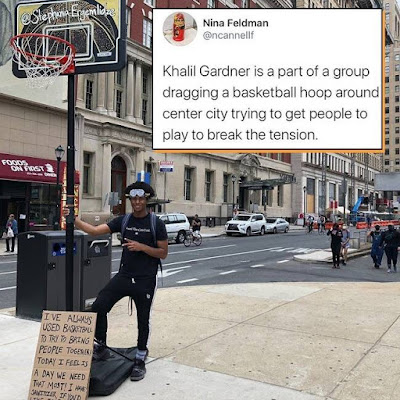 In Philadelphia, teenagers Stephania Ergemlidze and Khalil Gardner dragged a basketball hoop around town as a way to unite protesters and police and provide a break from the tension.

'I've always used basketball to try to bring people together!," a sign they carried with the hoop read. "Today is a day I feel we need that most!"

"The main goal was to get the police and protesters working together and playing together which I am happy to say we saw glimpses of today!" Stephania, who organized the Dunking on Racism GoFundMe wrote on the page. "I don't know if what I'm doing is the answer, but I'm hoping it can at least do some kind of good for my brothers and sisters of the POC community as well as the philly community as a whole." 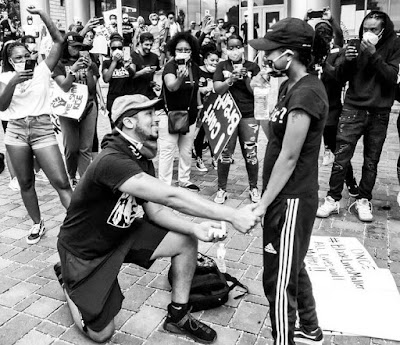 While protesting in Raleigh, North Carolina, Xavier Young got down on one knee and proposed to Marjorie Alston, with Xavier telling E! News the proposal almost didn't happen as she's pregnant and he had prior obligations. "I didn't want her out there alone," he explained, before going on to say he was able to cancel his plans and "snuck" the ring in with the essentials he was packing.

And when he got down on one knee—"boom, proposal," as he told us—a photographer, Charles Crouch, just happened to be standing near the couple and documented the special moment.

Crouch later shared three of the photos he took that day, along with the caption: "Went downtown to the protest against police brutality. I was blessed to capture this proposal in the midst of what would become chaos." 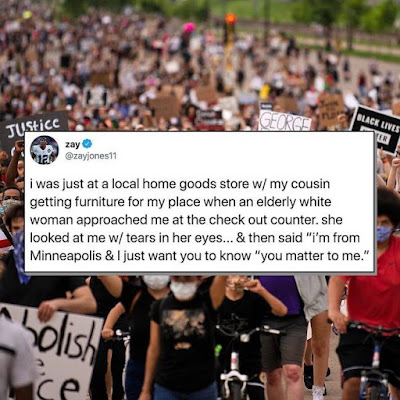 THE POWER OF WORDS

Zay Jones, a wide receiver for the Las Vegas Raiders, took to Twitter to reveal his heartwarming interaction with an elderly white woman while he was shopping with his cousin.

While at the store, the woman approached the pair and said, "I'm from Minneapolis [and] I just want you to know that you matter."

"I could see [it] was very sincere and heartfelt," the NFL star later told Good Morning America, going on to say he asked for permission to hug her amid the coronavirus pandemic. "I just felt like that was the right thing to do. And in an instant, she just kind of fell into my arms and she just started crying."

After the encounter, Zay had taken to social media, with his tweets going viral and garnering over 826,000 likes. "i didn't get her name but i am grateful for the encounter," he wrote. "beautiful hearts still exist. be the example. be the light. love others."


Mister Rogers life advice - love yourself, love your neighbor
Posted by The Matt Garcia Foundation at 2:49 PM No comments: