Clint Smith: The Danger of Silence


"We spend so much time listening to the things people are saying that we rarely pay attention to the things they don't," says slam poet and teacher Clint Smith. A short, powerful piece from the heart, about finding the courage to speak up against ignorance and injustice.
Posted by The Matt Garcia Foundation at 9:00 AM No comments:

Get signed up today!
Our late city councilman Matt Garcia was a young man with a vision.  Matt's dream was to make a difference in the community.  Many of his hopes have been realized through the programs we support including youth sports, empowerment programs, community service days, the Gun Buy Back, scholarship programs, the Matt Garcia Learning Center, the PAL Matt Garcia Youth Center, and much more.  The Matt Garcia Foundation is a 501(c)(3) organization run entirely by volunteers.   100% of your donation goes to fund these programs.

With the help of generous individuals and companies such as yours, our foundation has been able to raise the essential funds needed to “Keep the Dream Alive.”  We anticipate another successful event and we hope you will be a part of it.  Would you consider donating gift baskets, concert or sporting event tickets, vacation or spa packages, and other donations to be used for raffle and/or silent auction.

We are a high-profile organization with a powerful presence in the community that is associated with positive change.  As a sponsor, your name, business or establishment will be prominently displayed in all our event publicity.  The event itself is an opportunity to network with many potential customers and clients.   Most importantly, your donation will send a powerful message that you are partnering with us to create a world that is safer and more meaningful.  It is our mission to support youth, help stop crime, and strengthen our community. Thank you in advance for your support.  Your contribution will make all the difference!

For more information or to donate, please do not hesitate to contact me at (707) 452-9676, or email ktdalesley@comcast.com. 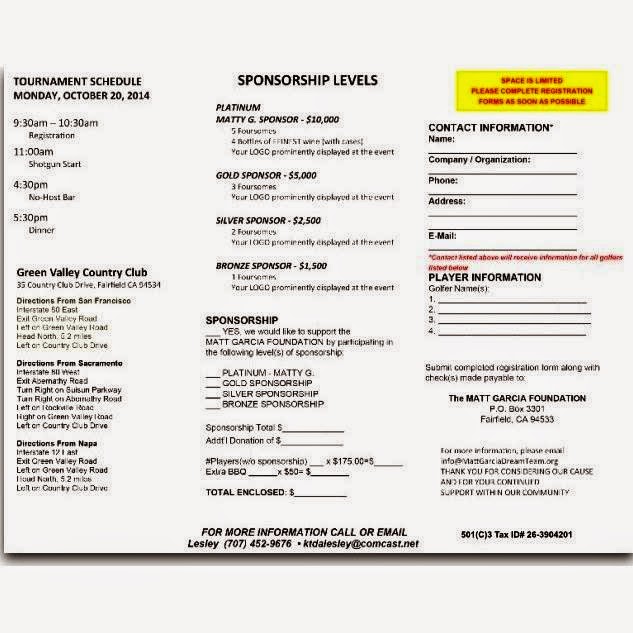 Posted by The Matt Garcia Foundation at 9:00 AM No comments:

Thank you to everyone who came out for the 7th Annual Matt Garcia Foundation Softball Tournament. 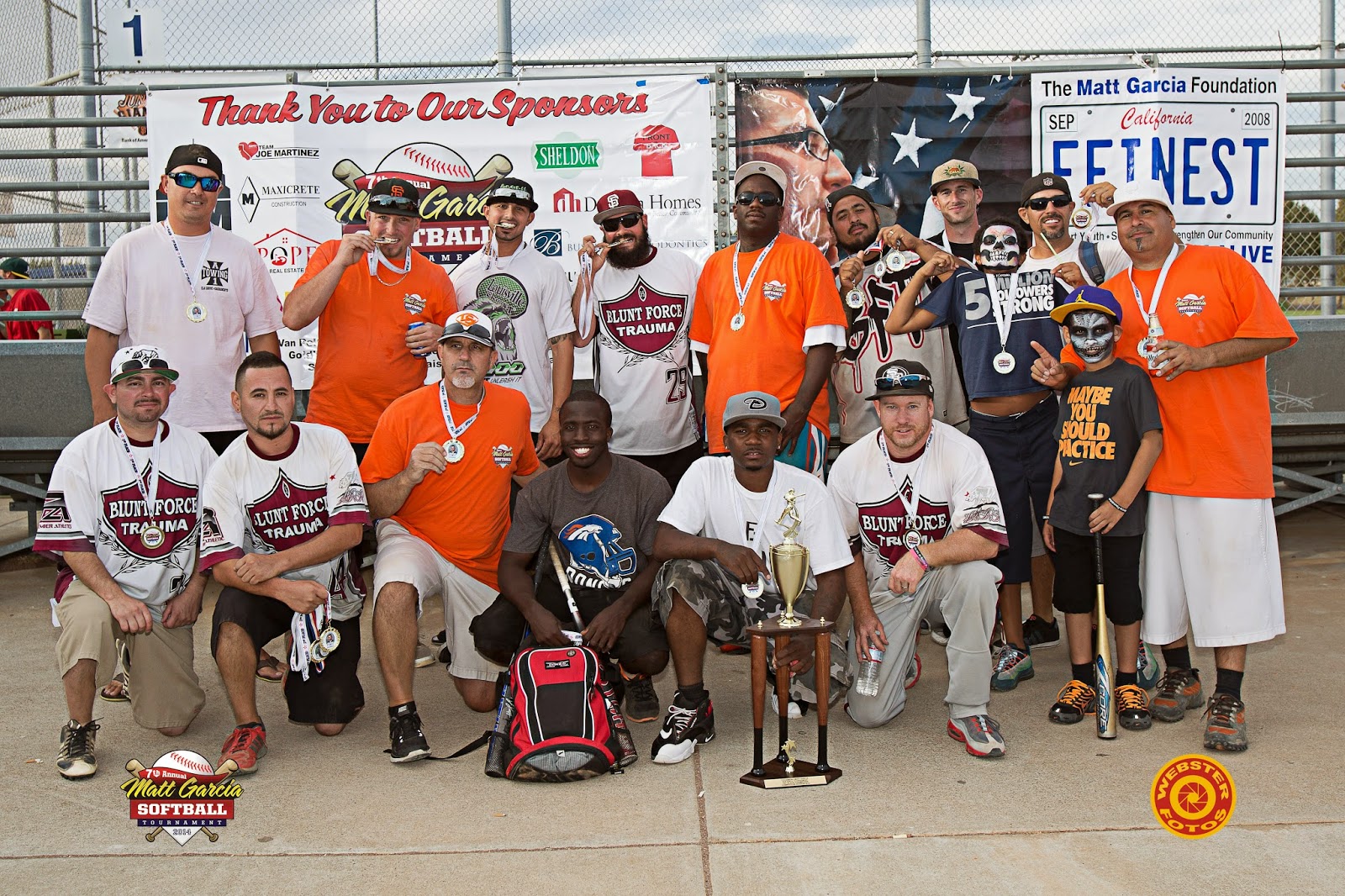 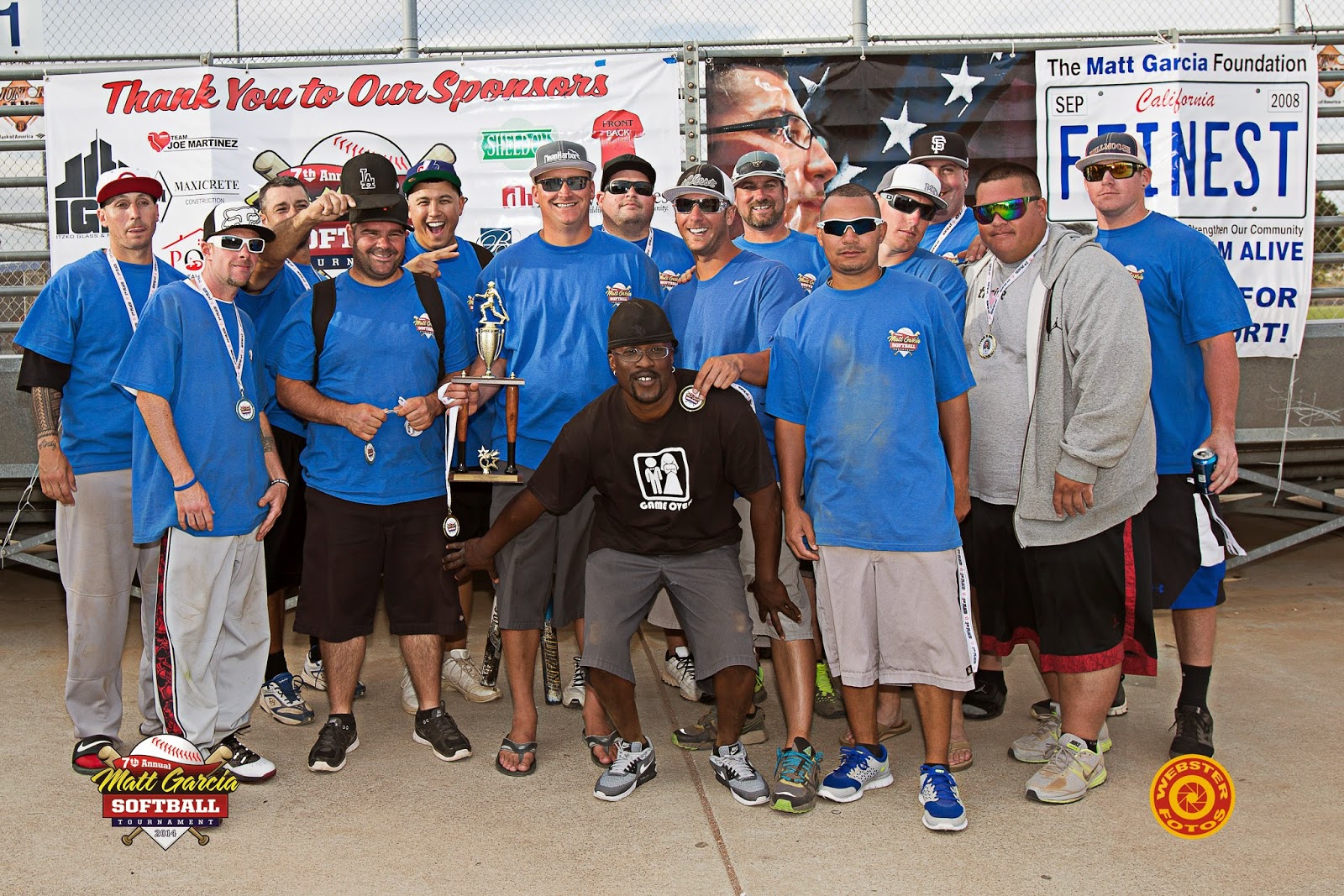 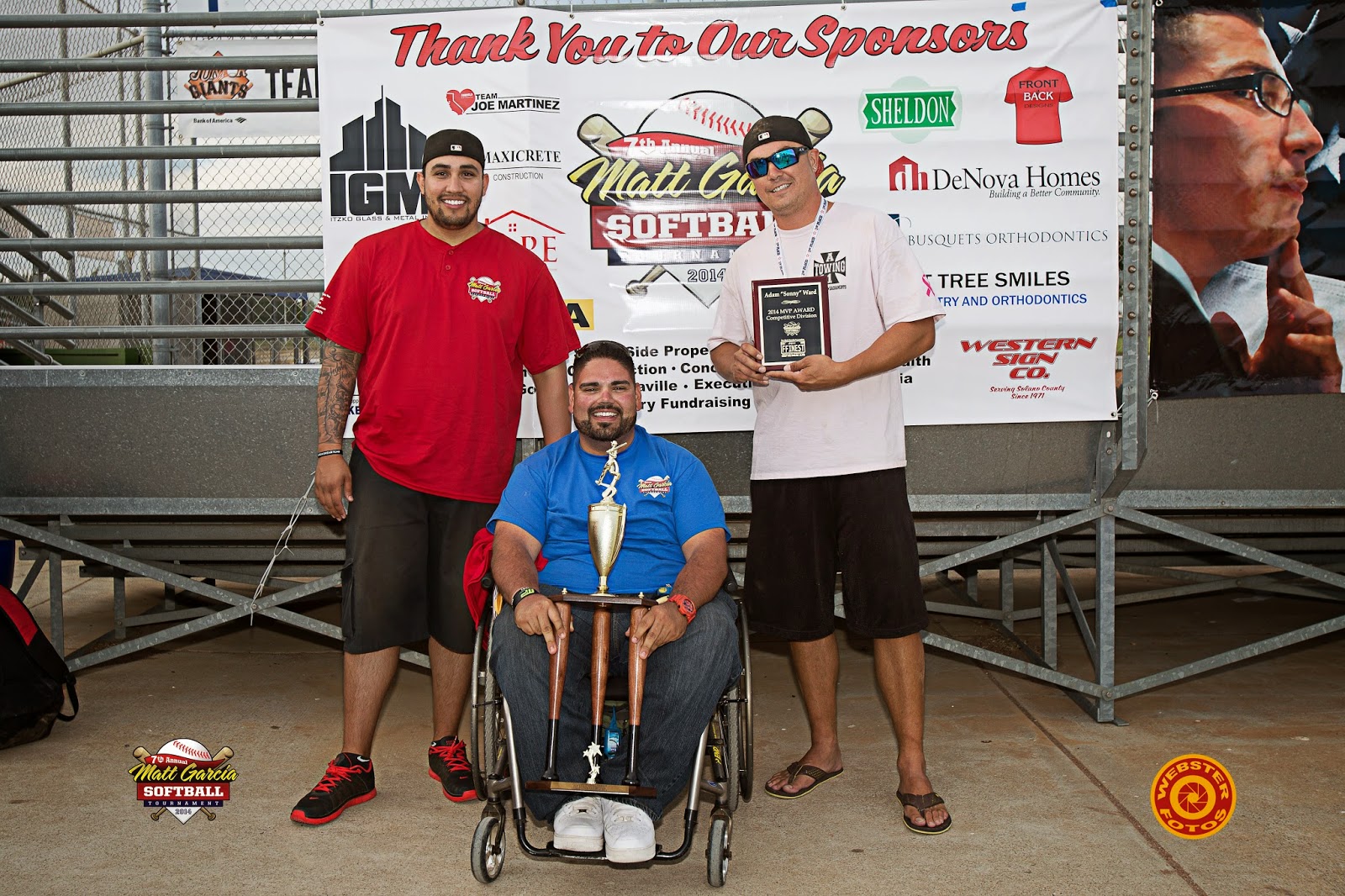 The Adam "Sonny" Ward MVP award went to Josh Garcia
Posted by The Matt Garcia Foundation at 9:00 AM No comments:

FAIRFIELD — Phil Arons had just come off a one-run victory Saturday in the 7th annual Matt Garcia Softball Tournament. As he changed from cleats to walking shoes, the Fairfield resident reminisced about the man whose tournament bears his name.

“He was a friend of the family,” Arons said. “He was a bat boy for our All-Star team.”

This is Arons’ second year in the two-day tournament, which concludes Sunday. He took the day off work to enjoy some softball with some friends and to raise money for a good cause.

Joe Castaneda made the trip from Oakland to play with his team, the Mambo Kings. He didn’t know Garcia, but he knew the young Fairfield city councilman had been killed.

Several family members were there to watch him play, Castaneda said.

“This is a very good way to get out and be with the family,” he said. “And it’s for a good cause.”

Both reasons helped him overcome a first-game loss. “We got dragged through the field,” Casteneda said.

David Diaz heads up the tournament, which benefits the Matt Garcia Foundation. He was friends with Garcia.

The family atmosphere brings teams back year after year, Diaz said. This year, 20 competed, coming in from Sacramento to San Francisco. Nineteen teams competed in 2013.

“This is one of the best community events for bringing everyone out,” he said. “We are definitely building a good reputation.”

The first tournament was held shortly after Garcia’s death in 2008. Diaz said Garcia would be “super stoked” to see so much support in his honor.

Garcia’s mother and stepfather, Teresa and Raymond Courtemanche, were at the tournament. Both expressed gratitude for those who support the event. Like Diaz, Teresa Courtemanche sees the event as one for family to enjoy.

The tournament has two divisions, competitive and coed. Each will vie for the championship as well as the most valuable player in each group.

The MVP honor has been named for Adam “Sonny” Ward, who died in 2013. Ward was a big supporter of the tournament and also played in it, Diaz said.

A jump house, music, face painting, silent auction and raffle are part of the event, which heavily relies on volunteers.

“The Matt Garica Foundation has a really good following,” Diaz said. “The volunteers just show up and are ready to work.”

Play resumes at 8:30 a.m. Sunday at the Lambrecht Sports complex on Petersen Road in Suisun City.

Our Past Doesn't Define Our Future: Kintay Johnson at TEDxYouth@HumboldtBay


In the spirit of ideas worth spreading, TEDx is a program of local, self-organized events that bring people together to share a TED-like experience. At a TEDx event, TEDTalks video and live speakers combine to spark deep discussion and connection in a small group. These local, self-organized events are branded TEDx, where x = independently organized TED event. The TED Conference provides general guidance for the TEDx program, but individual TEDx events are self-organized.* (*Subject to certain rules and regulations)
Posted by The Matt Garcia Foundation at 9:30 AM No comments:

David Steindl-Rast: Want to Be Happy? Be Grateful


The one thing all humans have in common is that each of us wants to be happy, says Brother David Steindl-Rast, a monk and interfaith scholar. And happiness, he suggests, is born from gratitude. An inspiring lesson in slowing down, looking where you're going, and above all, being grateful.
Posted by The Matt Garcia Foundation at 9:30 AM No comments:


In the United States, the agencies that govern prisons are often called ‘Department of Corrections.’ And yet, their focus is on containing and controlling inmates. Dan Pacholke, Deputy Secretary for the Washington State Department of Corrections, shares a different vision: of prisons that provide humane living conditions as well as opportunities for meaningful work and learning.
Posted by The Matt Garcia Foundation at 6:12 AM No comments:

Join Us For The 7th Annual Matt Garcia Softball Tournament This Weekend! 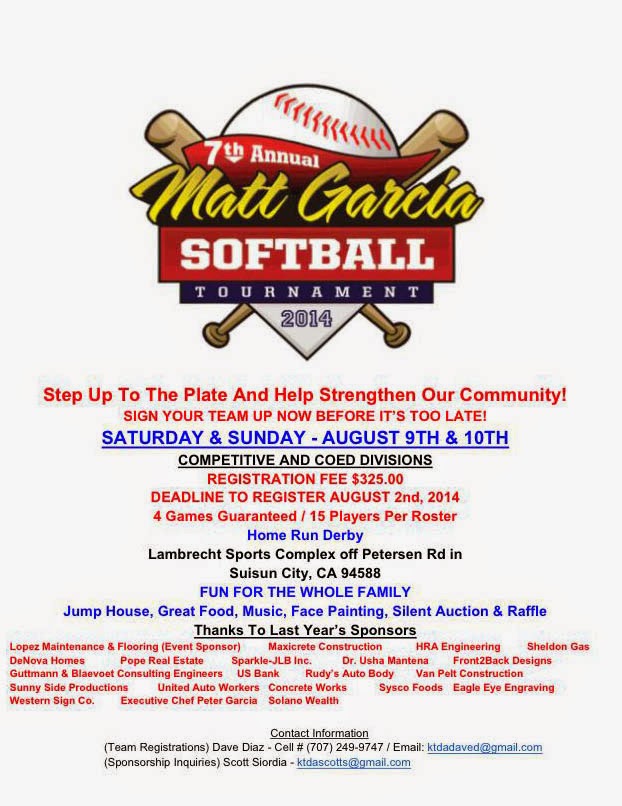 Come on out to Suisun City's Lambrecht Sports Complex this weekend. Fun for everyone Coed and Competitive teams, Chef Peter cooking up some great food, Dj Tony, Face painting and lots more!
Posted by The Matt Garcia Foundation at 9:02 AM No comments:


At the online University of the People, anyone with a high school diploma can take classes toward a degree in business administration or computer science — without standard tuition fees (though exams cost money). Founder Shai Reshef hopes that higher education is changing "from being a privilege for the few to a basic right, affordable and accessible for all."
Posted by The Matt Garcia Foundation at 9:17 AM 1 comment:


For hours of operation and more information visit their website @ www.fairfield-pal.org

The center was named in memory of 22-year old Fairfield City Councilman, Matt Garcia, who passed away in early September 2008. When Matt ran for city council, one of his campaign promises was to open a teen center. The center was originally to be named the Billy Yarbrough Youth Center, but at the request of the Yarbrough family was re-named.

In the past several years, the City of Fairfield was confronted with the growing problem of juvenile delinquency. Through the inspired efforts of Community Leaders, Law Enforcement, and Local Citizens to counteract this trend, the Fairfield PAL Matt Garcia Youth Center was established. The vision of the Fairfield PAL Matt Garcia Youth Center is to provide supervised programs such as basketball, boxing, martial arts, music, multimedia, soccer, dance, running, homework tutoring, and more.

The Fairfield PAL Matt Garcia Youth Center provides a framework of rules and regulations that serve as guideposts for youngsters while they are growing up and will continue to serve them in later years. Dedicated civilians and police officers serve as coaches, instructors and mentors to youth who participate in the Fairfield PAL Matt Garcia Youth Center programs. For some youth these adults are the only people in their lives holding them to high expectations while teaching basic fundamentals of sports and leadership.

The Fairfield PAL Matt Garcia Youth Center is a community based tax exempt charitable organization that raises funds through individual, corporation and foundation support. We leverage each donation ten-fold by the hundreds of volunteer hours our coaches and program volunteers contribute.
Posted by The Matt Garcia Foundation at 9:30 AM No comments: