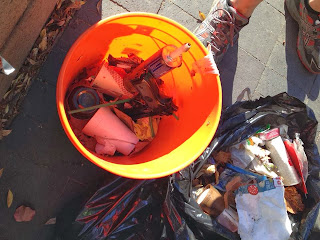 FAIRFIELD CA ‐ Two goals of the Matt Garcia Foundation are to clean the community and to get guns off the streets. Ironically they ended up doing both Saturday during their monthly Community clean up event.
The foundation gathered at the Downtown Starbucks at 9:00 AM as it does every month with dozens of volunteers of all ages to go out and clean an area of the city. After meeting together, fellowshipping and receiving basic instructions and clean up tools the groups headed out to clean the downtown area itself.
Upon returning, a first time adult volunteer returned with his bucket and told Raymond Courtemanche, Matt Garcia’s stepfather and Clean‐Up coordinator that he thought he found a gun on the 700 block of Jefferson Street during his rounds.
Courtemanche carefully removed the other debris from the bucket and found that the volunteer’s thoughts were correct.
Courtemanche said, “Upon finding that the volunteer had located and picked up a real gun, I notified Fairfield Police Department asking them to respond to our location and retrieve the weapon.”
Teresa Courtemanche, the foundation President and mother of Garcia said, “We teach people, especially youth, that if you ever come across a firearm to leave it where you found it and notify a Police Officer, Fireman or Teacher and not to move or examine it.”
This is most important and is why the Foundation conducts an Annual Gun Buy Back Program to remove unwanted guns from the streets after the senseless murder of the Late Fairfield City Councilman Matt Garcia in September 2008.
The Matt Garcia Foundation whose mission is to “Support Youth, Stop Crime and Strengthen the Community” the principles that Garcia ran for office and lived his life by.
To get more information about the Foundation or to Volunteer, you can visit their website at www.TheMattGarciaFoundation.org.

Posted by The Matt Garcia Foundation at 3:10 PM