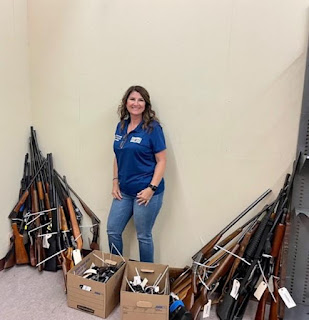 This is the third gun buyback event that we have participated in since Matt was murdered in 2008. The felon who shot Matt in the back of the head, was able to illegally purchase that firearm from another guy, at a garage sale, who also illegally obtained the gun from a storage unit. These are the guns we want off the streets. We know that most criminals will not be turning in their firearms, nor are we asking for law abiding licensed gun owners (as myself) to turn in their guns. I can tell you that we have had a former gang member turn in his gun.

I can also share with you that during one of our gun buyback events an elderly couple had a trunk filled with firearms. The grandson, who lived with them, had gone to prison. He left all the guns in their home. They were afraid to turn them into the police because they didn’t know how their grandson had gotten the guns or what crimes he may have committed with them. When they heard they could get those guns out of their home with no questions asked they were very grateful.

We often wonder if Maybe just maybe, there had been a gun buyback available for the initial person to turn in the gun that he obtain from the storage unit and get some money for it that way, instead of selling it to another Criminal…Matt may still be here today. We will never know. What we do know though, is that if one life is saved because an unwanted or unsecured firearm is no longer available to steal, or cause harm to oneself or someone else…THAT is a successful day!

Posted by Matt Garcia Foundation at 7:30 AM